Welcome to 2018. This year the last generation to be born in the nineties will mostly head off to university or into the world of work. A reminder of how time seems to be accelerating and how exciting it is that they have grown up in a technological age, for them there have always been computers. I am looking forward to 2018 and what it is going to entail.

I thought that I would give some of my thoughts with regards to what we may see happen in 2018. This is all my opinion some of which is informed by what I see and read, some that is just intuition and gut feeling and some irresponsible babble.

Well that was fun. I believe that I could have come up with quite a few more but that is where I will stop. I encourage all people to look towards a technological future in which we are all better off… that really excites me.

HAVE A FANTASTIC 2018 AND LIVE YOUR DREAMS!

This is short and sweet and to the point. Check out the reports!!! 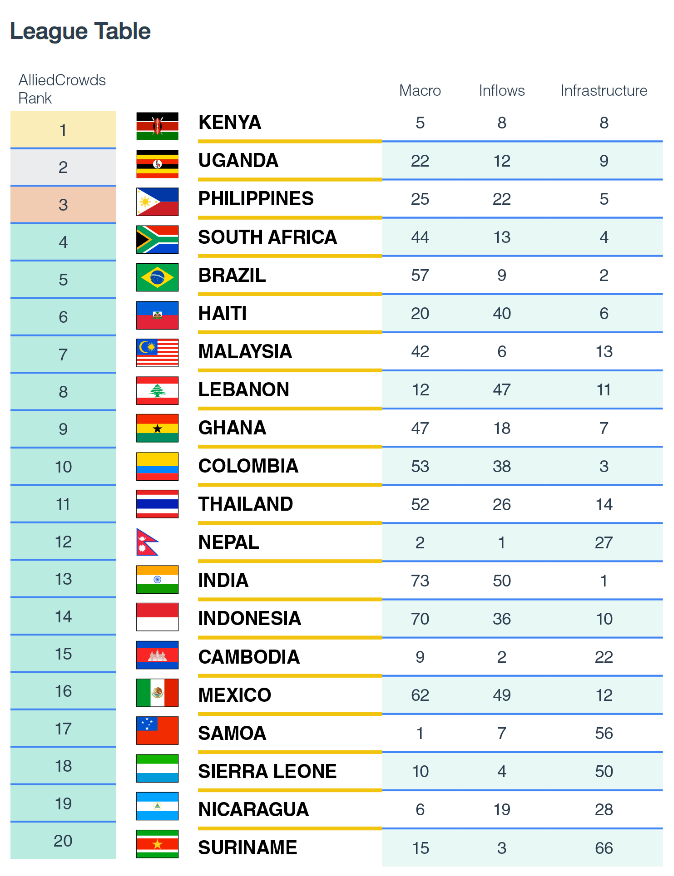 As the Internet becomes a more prolific force in the lives of more humans we are definitely going to see greater collaboration using internet enabled platforms. Peter Diamandis speaks of the rising billions in terms of the emerging world’s citizens who are gaining access to the internet. This is extremely exciting as greater access to the internet allows people to collaborate more efficiently. Essentially crowdfunding is human collaboration enabled by Technology. Crowdfunding gives people opportunities that may not have been possible prior to the internet. It is extremely exciting to think about how this can positively affect the emerging world.

If we take a closer look at crowdfunding we will see that this is not a new idea, humans have been collaborating for centuries. Examples of pre-internet crowdfunding are:

The foundation of crowdfunding via the internet though can be traced to the British rock group Marillion who in 1997 used donations from fans to pay for their US tour. In the same year writer/director Mark Tapio Kines designed a website to raise funds for his then-unfinished first feature film Foreign Correspondents. It was not really until 2003 when Brian Camelio, a Boston musician and computer programmer, launched ArtistShare that crowdfunding really started gaining traction. Maria Schneider’s jazz album “Concert in a Garden.” was the first project on ArtistShare and the campaign raised about $130,000. She won a 2005 Grammy Award for best large jazz ensemble album. This was the birth of rewards based crowdfunding and sites that we know such as Indiegogo and Kickstarter  launched in 2008 and 2009.

Debt Based crowdfunding saw its roots prior to the establishment of these rewards based platforms with the establishment of Zopa in the UK in 2004/5 and Lending Club in the USA in 2006.  The use of the internet to facilitate the collection of donations was in place long before donation based crowdfunding emerged in 2010 with the launch of  GoFundMe, which has raised over $2Billion to date.

In terms of Equity crowdfunding most information you can find focuses on the Jobs Act and America’s process to equity crowdfunding, EquityNet was founded in 2005 for accredited investors. You may not know that ASSOB took equity investing online in 2005 in Australia or that Crowdcube (founded 2010) and Seedrs (founded 2009) out of the UK are two of the most successful platforms for every man on the street.

This was a quick history and I have tried to make sure that it is as factually correct as possible. If I have made mistakes please comment about it.

This is most likely a good place to mention that I an working for a real estate crowdfunding company and together with some others based in Africa we have established the African Crowdfunding Association (ACfA) as a way to educate more and ensure that crowdfunding can impact Africa in a positive way!!!

Working 7 days a week has become my norm for 2016. I have found that I have quite a resilience and enjoy a life that is full of busyness rather than nothing to do. Working in a scale up business in the fintech space has definitely been worth it to date. I have met awesome people and have had to learn and stretch myself in different areas. I am enjoying being out of the pharmaceutical world; being confined to the box of pharmacist.

I count myself very fortunate for the situation that I currently find myself in. Sure it is definitely not easy or simple but doing something important never is. I have worked hard in order to be in a situation where I can make a difference. So some of the negatives are: personal projects are on the back burner, my body is being neglected, I am not focusing on my social life.

Realising the negatives and ensuring that I do not forget about them and overcoming them is important. People go on about the journey of life and I do want to make sure that I am making the most of it.

Part of my current role has allowed me to look into different companies, researching and learning in order to ensure that we know where we stand in terms of our industry and what we need to do to push forward. Doing this has reminded me how full of information the internet is and how so much information is lost in the enormity of it, for example how this blog is a microscopic speck in the galaxy of the internet. One could look at this in two ways: I am insignificant and therefore should play no role on the internet or wow, there are billions of people who are a potential audience.

I will be sharing some of my internet finds moving forward and plan to take on a more consistent role of sharing online.

So this week I will share a find that was sent to me by our CEO, Scott Picken. If you are interested in start-ups, venture capital and entrepreneurship then check out CB Insights. You can sign up for free for 30 days and you can find out a whole lot of information regarding the funding of companies and more. The info is pulled from the internet and it not completely accurate, I say this as the info on our company is not completely correct.

That is it for today. 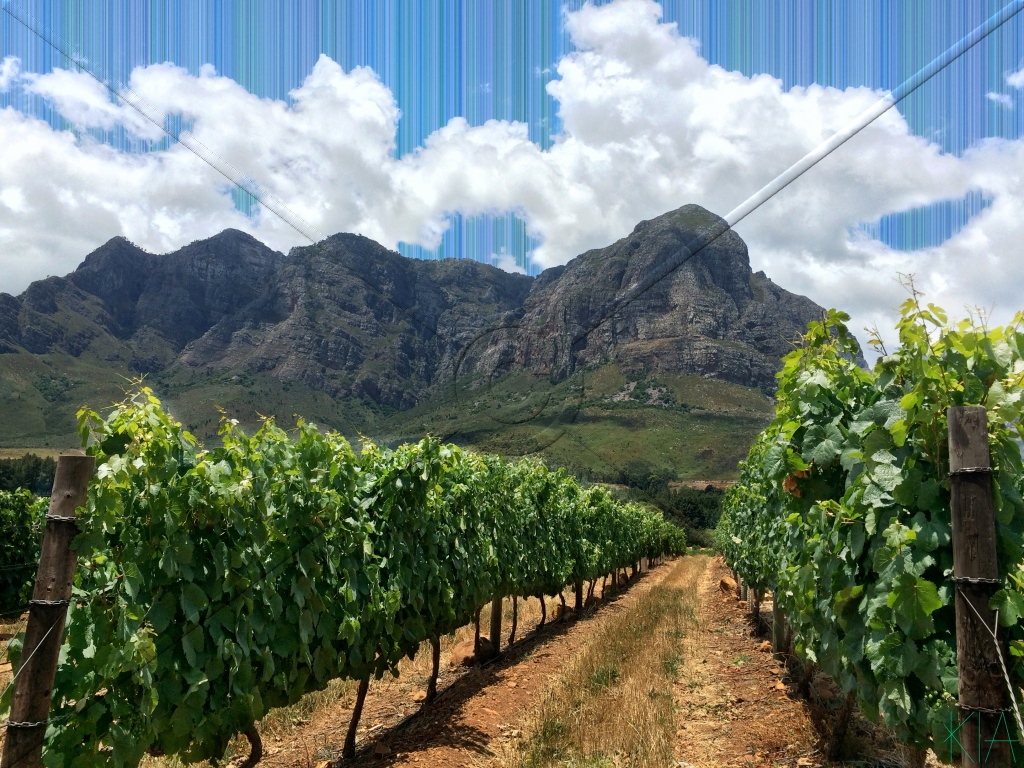 The Banghoek (meaning “scary corner”) valley is located over the Hellshoogte pass and an area in which I will own an estate one day. The picture for this striated sky was taken on the Oldenburg wine estate (in the Banghoek Valley) looking up at the Drakenstein Mountain Range. Banghoek Valley, got its name due to the dense forest, leopards, steep ravines and other dangers encountered by settlers.

Hellshoogte is the oldest pass in South Africa. The original Pass was built in 1692, in order to make ones way to Franschoek (where the Huguenots settled after arriving in 1688).  It was the main road to Franschhoek and for many years was regarded as a dangerous route, especially in the dark. The origins of the name is likely from the steep gullies (“hells”) on the ridge. In 1854 the road was greatly improved and used until being replaced by the new/current road in 1972.

A left turn off the R310 onto Zevenrivieren road will put the Mountains in front of you, the road winds and becomes gravel. The road is well sign posted and finding Oldenburg estate is a cinch. On arrival you are greeted by the spectacular new Cellar Door. The building was designed by architect Simon Beerstecher, and the interior design is by Kelly Hoppen.

Oldenburg is owned and run by Adrian and Vanessa Vanderspuy. Adrian was born on the neighbouring farm but his family left South Africa in the 1960’s. He would return to visit Oldenburg yearly for Christmas. Dorothy Vanrenen, Adrians grandmother, lived at Oldenburg with Helmet Holmann. In fact it is Helmet who named the farm Oldenburg in memory of his German roots in the city of Oldenburg. Visit the Oldenburg Vineyards Website for more history.

It was in 2002 that Adrian decided to pursue the possibility of bringing Oldenburg Vineyards back to life given that the farm had fallen into a parlous state. The vineyards were replanted from 2004-2006 and the maiden vintages of Syrah, Cabernet Sauvignon and Cabernet Franc were produced in 2007. In 2010 the first whites were produced, the reds were launched (all were included in the SA Top 100 wines)  and in 2011 the cellar door opened.   In 2014 Philip Costandius joined as General Manager and Winemaker, later that year The Homestead was opened.

Visit the Oldenburg Vineyards Website to find out more about this amazing place and the people who make it happen or go one step better and visit them in person, you will not regret it. The views are amazing, the wine terrific and the atmosphere spectacular.  As I said at the beginning, one day I will own a property in this valley.

I have to end off this blog by saying Thanks to all the peole who have followed me and my 52 Striated Skies Project. My next big step is going to be figuring out how I can exhibit this in 2016. Here is to an awesome 2016!!!